A newspaper that gives its reader what the reader wants will last in this competitive world, Discussed journalists at Suryadatta seminar – Current trends and Opportunities in different segments in print and electronic media

Prof. Dr. Sanjay B. Chordiya was honored for his outstanding contribution in the field of Education 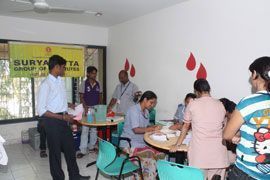 Every year Suryadatta Group of Institutes conducts Blood Donation Camp / Health Awareness program in theirall group institutes as a part of Edu -Socio Initiative. Suryadatta Group of Institutes is keen on undertaking various social and human initiatives for the betterment of the society and life in general. Suryadatta in consultation with renowned eye specialist and diabetes specialists organized a free health check up camp & 2nd Blood Donation Camp in this semester.

It was merely not just the check up camp, but was supported by awareness sessions on the relevant topic. The camp was conducted

The Health Camp comprised of:

Dr. Madhusudan Jhamwar, renowned eye specialist and social worker addressed the audience on the topic of “The Eye Care awareness”. He mentioned about How to take Care of Eyes, Precautionary Measures, awareness tips & importance of Eye Donation. He also gave power point presentation.

The camp was held in the presence of Founder President & Chairman, Prof. Dr. Sanjay B. Chordiya who guided the volunteers and expressed his views on the “ Edu – Socio Connect”, Unique initiatives of Suryadatta Education Foundation.

Students from all campuses of Suryadatta Students, parents of students, Faculty & staff of Suryadatta group were present in large numbers for the said program. Senior citizens from “ Matoshri” and parents were also present on the special invitation as the topic of the seminars were apt for them also. People from nearby societies were also present for the program. This camp proved to be a tool for building awareness & positive approach towards health amongst all the members present for the camp and inculcated social spirit / awareness among the young budding managers.

This was the second blood donation camp arranged in the span of last 3 months. @ 52 students / faculty members donated their blood on 7th November 2011.

All the doctors, their team members appreciated the efforts taken by the institute and their students.

Learning is an ongoing process, which has nothing to do with age. Whether you are four or you are forty, you are always keen to learn something new. Drawing inspiration from this, Suryadatta had launched its 2nd batch of English speaking & Computer awareness programs offered voluntarily to Auto Rickshaw Drivers & Housewives free of cost.

This training programme for a batch of 80 persons, comprising 40 auto rickshaw drivers and 40 housewives started in January 2011 and completed successfully on June 24, 2011.

On this occasion, Mr Sanjay Chordiya, Chairperson, Suryadatta Group of Institutes, said, “In the 21st century, knowledge of English and to be able to converse in English is a necessity rather than the need of time. The response to the programme was tremendous from both rickshaw-drivers and housewives and we are awarding certificates to 80 candidates of this programme.”

Certificates were distributed to those who have successfully completed the programme at the hands of Shri Baba Adhav, President of Rickshaw Panchayat & Shri Jayant Umranikar, former Pune Police commissioner and Shri Deepak Shikarpur, who were present as Chief Guest and Guest of Honour respectively.

Shri Jayant Umranikar said, “Women are the backbone of family system yet their education remains neglected most of the time. Now days English has become common language for communication. Dr Sanjay Chordiya has always been ahead in undertaking such social initiatives. This initiative by an education institute will help our society go ahead and keep pace with time.”

Shri Baba Adhav said, “Rickshaw drivers always aspire to learn these skills but most of the times cannot make it either due to financial or time constraints, or even both. But by offering these courses free of charge, Suryadatta has not only provided a helping hand to them but also awakened their learning spirit. I congratulate Suryadatta for this innovative and useful activity.”

Shri Deepak Shikarpur said, “With globalization everything is becoming high tech” English speaking and Computer learning is the need of the hour. And hence Suryadatta started this initiative of offering this training to various communities of society in a row. Suryadatta is getting overwhelming response to it.

A housewife is life and blood of the family. Her role in the family is as same as the heart and brain in the human body. A learned and trained housewife can bring in health, happiness, soundness and satisfaction to the family in all the respects and facets of life. One such family into many such families will go a long way in building a developed society and nation. Suryadatta has taken one such initiative to train and impart learning to this vital element of the society.
Contents of the course were as follows,

The English Speaking course comprised of:

1. Basic Grammar
2. Words and Sentences formation for daily usage
3. Writing English with different situational examples
4. How to speak clearly so that the other person understands

While the IT/ Computer skills course comprised of:

In the past, Suryadatta has trained more than 2000 school children, 120 Auto Rickshaw Drivers, 500 women and 100 senior citizens. Senior citizens started communicating with their children abroad with the help of knowledge of Computer, Internet and English language. They also started talking to their grand children’s in English, which was up till then little difficult for them.